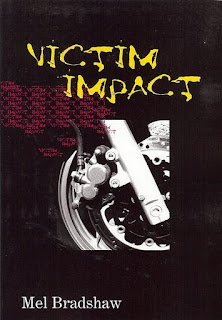 Not every author can walk the fine line between story-telling and point-making. There is always the risk of being too obvious, too preachy; or on the other hand, being too subtle. Bradshaw did a brilliant job in this novel. Holy shit.

The story is about a man, Ted, who teaches Criminology at the University of Toronto and receives some information about a biker gang from an overeager student; information that leads directly to the violent death of his wife, Karin, through a botched burglary attempt. The novel follows Ted and his father-in-law attempting to deal with the loss of Karin; the detectives investigating the case; the repercussions for the killer and his family; and Ted's attempt to get revenge.

On the night his wife is killed, Ted has stepped in for a colleague to moderate a panel on how to deal with violent crime. Much of the discussion revolves around the need for revenge vs. prevention/rehabilitation, and how our feelings change when someone we love becomes a victim of crime. It's a masterful plot device, having Ted hearing this discussion while his wife is in the process of being that victim. The story is about criminology, and about how we are limited by what we can intellectually argue from a point of logic and reason; without the emotional impact of being victimized ourselves, our opinions on crime can only stretch so far. Bradshaw demonstrates within Ted an impasse: he knows logically that his opinions on prevention and rehabilitation are correct in the grand scheme of things; but the pain of his loss can only drive a desire for revenge.

I suspect that the author's sympathies are with the "softer" take; he seems to sympathize with the social science perspective even while showing a great deal of empathy for his victim characters. The killer is also an interesting study - he is [spoiler alert] a young man from a well-adjusted suburban family, who seems to have a sociopathic streak (definite shades of We Need to Talk About Kevin). So the question also becomes: could this have been prevented, anyway? Would the lenient sentences that Ted himself advocates have been the best thing for the killer?

This book raises a lot of questions about the criminal justice system, and doesn't have any answers for any of them. Ted's final act of revenge is satisfying but ultimately troubling. There are no easy sympathies here. I was thoroughly challenged by this book; there was a point where I almost stopped reading it because it was so upsetting. But it's brilliantly put together, well written, and important.

The Toronto setting is a little underused, but the actual bulk of the story takes place in the much more suburban Mississauga, which I believe is important to the plot.

Overall I think this book was very good, but not super easy or chill to read. I highly recommend it, but don't expect a relaxing read for the cottage or whatever. It's a winter book for sure.

Four towers out of five.

The Pedgehog
I am 30 years old and I live in Toronto, Canada.

I could not do this without...